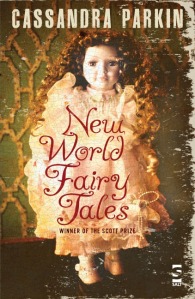 New World Fairy Tales is a collection of short stories, influenced by the Grimm Brothers’ fairy tales, set in the ‘new world’—chronologically as well as geographically. It is also the winner of Salt’s 2011 Scott Prize for a debut collection of short stories. I must confess that I didn’t have high expectations—it seemed a rather hackneyed concept; what could possibly be extracted from these stories that hasn’t already been exploited by Disney or parodied by Dahl? (Although, who doesn’t appreciate Red Riding Hood whipping a pistol from her knickers?) Cassandra Parkin’s interpretations, however, are fresh and inventive without losing the enchantment of the original tales.

The stories take the form of interviews and are not named, but numbered: Interview #4, #9, #15, #17, #27 and #42 respectively. I’m not sure if there is meant to be a message in that particular sequence—they are similar to the magic sequence of numbers in Lost: 4, 8, 15, 16, 23 and 42, and they  end on the portentous 42 which is the answer to the ultimate question in The Hitchhiker’s Guide to the Galaxy,  but I digress. The interviewer is an un-named college student, touring the US, collecting stories. The interviewees are sometimes reluctant to cooperate but there is always a story to be wheedled out of them. They are all told in the first-person and, as an English person writing American voices, Parkin is very convincing.

The first interview immediately demonstrates how these stories differentiate themselves. The setting is evocative—New Orleans during Mardi Gras. The characters seem familiar—two stepdaughters, a step-mother, but where is Cinderella? There is an interesting twist: the step-mother is the Cinderella of this version—exploited by her step-daughters. It was not my favourite story but it encouraged me to continue exploring Parkin’s world. It is another universe that she has imagined—the settings are earthy and grounded but the stories convey an air of wonder that is other-worldly—the stuff of fairy tales—and yet somehow they do not lose their sense of authenticity. They are incredibly engaging. This is quite an achievement, particularly for short stories. A lot of contemporary short stories, in their endings specifically, seem to tend towards rather dire, kitchen-sink realism. Happy endings have fallen out of favour. Parkin’s stories unabashedly defy this trend—this is not even deus ex machina—this is magic. And we believe in her endings—we become the audience, clapping our hands to prove that we do believe in fairies.

Part of the fun of these stories is figuring out which original fairy tale is being referenced, some of them are easier to spot than others. (One of them I’m still not sure about.) I will try not to spoil all the surprises but one of the most straight-forward conversions is found in Interview #9—the Three Little Pigs become three corrupt cops pursued by a vengeful, lupine goddess—and boy does she blow their houses down. Some of the links are a lot more tenuous than this though—this is no paint-by-numbers homage. My favourite one has a Rapunzel connection but the story charts its own course, meandering through the forests of the Blue Ridge Mountains and a love story that spans twenty years. Its protagonist, Cornelia, is a sculptor, who moulds her life, as her art, with great patience and serenity. I found Cornelia to be one of the most interesting characters, perhaps because the vast scope of this story allows us to follow the development of her sense of identity and her creativity. The final story in this collection is a contemporary Snow White that is more moving and captivating than either of the recent Hollywood versions.

New World Fairy Tales is immensely enjoyable and utterly compelling; I was drawn into each world and into the concerns of each of the characters. I would highly recommend it.

This review was first published on the Writers’ Hub.