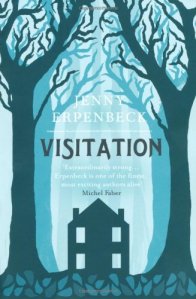 Visitation is a compact but powerful book that is hugely emotionally engaging despite its experimental structure and non-emotive prose. As Michel Faber writes for the Guardian: ‘Visitation allows us to feel we’ve known real individuals, experienced the slow unfolding of history, and bonded unconditionally with a place, without authorial pestering or pathos-cranking.’

The main character in Visitation is not a person but a place, a house on a small piece of land on the edge of a lake in the Brandenburg forest. The human characters, the successive inhabitants of this house through the early decades of the twentieth century, are ghostly and transient against this backdrop. Like many things in this book the title has layers of meaning. Visitation has connotations of hauntings – the inhabitants of the house live with the presence of the former residents – but it also suggests that our occupation of this world is temporary. We are all just visitors here.

The book opens with an even bigger picture – the shifting tectonic plates and melting ice that created the lake in the first place: ‘Approximately twenty-four thousand years ago, a glacier advanced until it reached a large outcropping of rock that now is nothing more than a gentle hill above where the house stands.’ The message is clear from the first sentence of the prologue – even the landscape is transient in the great sweep of history.

There is a common thread that ensures that the succession of characters does not feel too swift and desultory—a framing device in the form of a caretaker. ‘The Gardener’ is a constant figure who crops up between each chapter, pruning, sowing and weeding. ‘…he’s always lived there, everyone in the village knows him, and yet he is only ever referred to by both young people and old as The Gardener, as though he had no other name.’

The first human characters we encounter (after our introduction to The Gardener) are the Mayor and his four daughters. This recounting of their lives has the feel of a fable. Their world is framed by superstition, rituals and rules, but it does little good—the tragic Klara (the first owner of the land by the lake) slips slowly into madness and ruin. There is also an interesting reversal: instead of setting up Klara to haunt the future inhabitants of the house that is yet to be built, Klara sees a foreshadowing of future ghosts: ‘Only now, when she is looking for a good spot to sit down with him, does it strike her how many people there are all around her in this bit of woods, and everywhere there might be an attractive spot to rest, someone is already sitting or standing, […] It’s no doubt because all these people are so quiet that she didn’t notice them before.’

Most of the characters are not referred to by name but by designation: ‘The Architect’ ‘The Cloth Manufacturer’ ‘The Childhood Friend’. As readers we are disarmed into believing that we are seeing the characters in a dispassionate and impersonal way where in reality we are drawn in and absorbed into their lives. Each small action, related in rich detail in the present tense, has significance and is intensely moving and engaging. The huge historical events that lie under the surface of the narrative, including the Second World War, are not reported chronologically. Occupation of this particular territory, rather than being subject to regimes, becomes almost seasonal, in rhythm with the ubiquitous Gardener’s planting and pruning. The concept of conquest and ownership seems ridiculous in the vast metanarrative of history. Erpenbeck does not take sides or make judgements; there are no ‘good’ characters and ‘bad’ characters. She merely gives us glimpses, telling details about how the events affect the lives of the characters. This creates a sense of authenticity; the scenarios are observed rather than engineered: ‘When he acquired the bathing house from the Jews, their towels were still hanging there. Before it could occur to his wife to wash them, he’d gone swimming and rubbed himself dry with one of the strangers’ towels. Strange towels. Cloth manufacturers, these Jews. Terrycloth. Top quality goods. Not too much to ask.’

The epilogue, rendered in the technical language of demolition, is intensely moving – testament to the author’s skill in creating emotional investment in a piece of property, for all that it represents: ‘…care should be taken to minimise vibrations when the demolition is carried out so as to reduce the environmental burdens of dust and noise and prevent cracks from developing in nearby buildings.’ As a reader you actually mourn the death of the house—the vibrations continue to resonate after the house is gone and the book is finished.