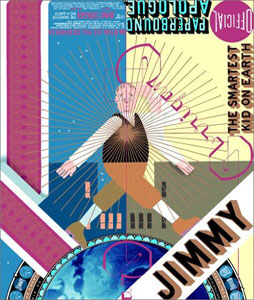 I particularly enjoy reviewing books that I hate at first, but that grow on me as I read. Jimmy Corrigan was on the reading list for the module I’m taking at the moment so I didn’t have a choice—I had to read it. I picked it up with some interest but within a few pages I was feeling lost, annoyed and depressed. This feeling persisted for at least the first half of the book. Despite myself I became invested in Jimmy somewhere around the middle of the book. By the end I was weeping, awarding it five stars on Goodreads (and I don’t give five stars lightly) and ready to start reading it all over again—a very satisfactory transformation.

I have never got into graphic novels. It seems that as a graphic-designer-turned-writer this should be my ideal medium, but I haven’t read very many. Perhaps this is because I didn’t read a lot of comic books as a child. I read a bit of Asterix (which was useful for me when my kids started school in the UK and I was expected to know what a ‘mufti’ day was) and I got into Archie for a while but the endless love-triangle was very annoying—why did no one ever call Archie out for being a two-timing cad? I’m sure Archie comics have a lot to answer for in terms of gender relations…

What I find frustrating about graphic novels is that the illustrations slow me down. I am usually quite a fast reader and I tend to skim along the surface of the page without sinking into the individual words and phrases. Jimmy Corrigan required me to read differently. Chris Ware said in an interview in The Guardian:
“…comics are a very active medium. The appeal is they masquerade as a passive medium, but they’re not at all. It takes a lot of effort to read comics, even though it seems like they’re easy.”
Each page of Jimmy Corrigan mires you down in beautifully illustrated detail. Sometimes the format changes and you have to change the orientation of the book. Some of the text is really small and printed on a dark background so you have to turn a bright light on to read it. Sadly, it’s not a book you can read easily in bed and this is obviously not a book that you can read on a Kindle. I bought the paperback edition but I think the hardcover would have been even better. This was a book designed for hardcover and a great case in point to promote the survival of the book as a physical object.

In style Jimmy Corrigan owes a lot to Tintin and classic broadsheet comic conventions—it is a nostalgic flashback to an earlier time. Chris Ware calls the book a ‘comic’ not a ‘graphic novel’ and this in itself is disarming; the author is not pretentious and the book is unassuming—it’s working-class literary fiction.

Jimmy Corrigan himself is an insecure, lonely little man—tied to his mother’s apron strings, desperate to be loved but too fearful to make a move towards his own happiness. He has grown up without a father but one day, at the office, he receives a letter from his biological father suggesting that they meet. He has fantasised his whole life about what his father might be like and the reality is bound to disappoint. Jimmy has a vivid inner-life and through the graphic medium we see his imaginings running parallel to the actuality of his situation. We also learn the sad story of Jimmy’s great-grandfather whose loses his mother and is abandoned by his father, and of Amy—Jimmy’s adopted, African-American sister. None of the characters are comic-book beautiful. They are all rather unattractive and ordinary, but each character has their own inner world of memory, imagination, hopes and fears that is incredibly colourful and moving. It is a book that champions empathy. As Chris Ware says:
“I suppose we all feel like we’re inadequate in some way, and there’s no reason why you can’t empathise with anyone, regardless of their circumstances.”

In traditional novel form this would be an incredibly depressing book but there is something in the rich visual detail that renders a depressing story more appealing. It somehow gives meaning and dignity to an undignified life. A comic about a lonely man with an overactive imagination becomes a haunting and devastating treatise on the human condition. It’s quite the magic trick.

In class last week we also got to look at Chris Ware’s latest book, Building Stories, which I hadn’t realised was a box the size of a board game containing a set of smaller pamphlets which could be shuffled and read in any order. So that’s on the top of my Christmas wishlist now.