a girl made of air, a thousand ships, book review, daughters of night, hamnet, humankind, the confession, the dutch house, the five, the mercies, the mirror and the light

I’m way ahead on my Goodreads 2020 Reading Challenge—thanks to the Covid-19 lockdown. Here are some of my favourites:

(I’ll do a separate post for young adult and children’s books.)

Rutger Bregman sets out to debunk the ‘veneer theory’, the idea that humans have a thin facade of civilisation that easily cracks under pressure to reveal the evil creature within all of us, as depicted in William Golding’s classic novel, The Lord of the Flies. Some of the examples Bregman investigates are fascinating, from the Christmas truce in the trenches of World War I, to the history of Easter Island, to the psychological thought experiments that supposedly proved how evil we are: the Stanford Prison Experiment and the Milgram Shock Machine experiment.

This is not a blindly, naively optimistic book. Bregman addresses the evils that humans perpetrate, but he is also clear on the role that newspapers and social media play in creating clickbait content that incites fear and prejudice and doesn’t in fact accurately reflect how most of us live. Humankind is, however, a book with a purpose—to raise our expectations of humanity and to inspire us to hope that we can create a better society. It is a thoroughly inspiring book as well as being very readable and engaging.

A Thousand Ships by Natalie Haynes

A Thousand Ships is the story of the women of the Trojan War: from Queen Hecabe and her daughters, prisoners of the Greeks after the fall of Troy, to Clytemnestra plotting revenge on her husband Agamemnon, and capricious goddesses fighting over who is the most beautiful, callously setting in motion the events that lead to the war. One of my favourite strands was Penelope’s caustic and sarcastic letters to Odysseus as she hears tales of his vainglorious exploits, long after he should have returned from the Trojan War.

This book will inevitably be compared to Pat Barker’s devastating The Silence of the Girls—though The Silence of the Girlssees the story of the Trojan woman through a twenty-first century lens, while Natalie Haynes tells her stories in a style more faithful to the original tales—an accretion of small cuts rather than the horrific gaping wound of Pat Barker’s novel. This brevity makes the book less emotionally engaging to start with, but it weaves a tapestry of woman’s voices that create an impressively epic narrative that encompasses vast distances and many years.

The Dutch House by Ann Patchett

Tom Hanks was the perfect narrator for Ann Patchett’s family drama centred around the relationship between Danny Conroy, his sister Maeve and their childhood home—the ‘Dutch House’. The story flits backwards and forwards in time from their father’s sudden windfall and the initial acquisition of the Dutch House, to Danny and Maeve’s banishment from the house, their adult relationships and the arrival of the next generation of Conroy children. Eventually the story comes full circle with the resolution of family relationships long steeped in bitterness and resentment. Danny is the self-centred, and sometimes obtuse narrator but his older sister Maeve is the fierce heart of the book and the subject of the painting on the cover—which I believe the author had specially commissioned.

There is something immersive about listening to an audio book, perhaps because it forces you to slow down—I spent days with Danny and Maeve in the Dutch House, rather than hours. An incredibly insightful, warm and engaging story.

A Girl Made of Air by Nydia Hetherington (September 2020)

You’ll have to wait a few months for this one, it will be published in September 2020, but it is currently available to pre-order. An unnamed tightrope walker relates the story of her childhood in a post-war English circus and her rise to fame in New York. While the headliner of this tale is the ‘Greatest Funambulist Who Ever Lived’, ‘A Girl Made of Air’ is the story of several women: the Funambulist herself, her mother Marina, her mentor Serendipity Wilson, and Serendipity’s daughter, Bunny. At first, the narrator strives to become the greatest funambulist who ever lived, but this ambition is overtaken by a more solemn quest—to find a missing child and make amends.

The story is told in fragments: diary entries, taped interviews, letters and Serendipity Wilson’s Manx folk tales. This may sound disjointed, but these aspects intertwine to create a rich tapestry of family history, myth, trauma, love and loss, and the narrator’s quest provides a momentum that blends the disparate pieces into an engaging story. There is an element of magical realism, but this is grounded by the circus setting: the visceral odours, the clamour of the crowds, the glitz and the grubbiness of this itinerant life. Though she narrates her own story, the sense that the funambulist herself and all her achievements are as evanescent as air, adds a melancholic and wistful quality to this tale. Thankfully, there is an appropriately serendipitous ending to leave a lingering glow as the stage lights dim. I thoroughly enjoyed this vivid, lyrical and poignant novel.

Few historical details are known about William Shakespeare’s life, but Maggie O’Farrell has taken two scraps of information: the death of Shakespeare’s son Hamnet at eleven, and four years later, the production of his play Hamlet, and spun them into an incredibly powerful and moving novel about love and grief. It is beautifully structured, flitting from Hamnet’s desperate search for help when his twin sister Judith falls ill, back to the moment Shakespeare first sees his wife Agnes, and onwards. Shakespeare himself is mostly absent in the story—referred to only in reference to the other characters: the oldest son, the husband, the father. Instead the story belongs to Agnes (Anne Hathaway) a woman traditionally pitied and scorned by history as Shakespeare’s older, spurned wife—left to moulder in Stratford while Shakespeare found fame in London. And I think that is what I love the most about this book, that it gives Agnes agency and a voice in her own life, and in Shakespeare’s. Hamnet’s death is, of course, heart-breaking, but the final scenes of the book are particularly stunning and devastating. Absolutely brilliant, this might be my book of the year.

The Mirror & the Light (Thomas Cromwell Trilogy #3) by Hilary Mantel

I read this book very slowly through the first few weeks of the Coronavirus lockdown, which made it quite an intense and emotional experience. I found it quieter and more contemplative than the first two books—Anne Boleyn’s execution is such a dramatic moment that this book was bound to feel a bit like one long denouement. But it is as brilliantly written and as immersive as the other two, with an additional undercurrent of impending doom (which was exacerbated by the current circumstances).

One of my favourite moments was when Cromwell is astonished and delighted to meet a daughter he never knew existed (she is a fictional character but real historical accounts do suggest he could have had an illegitimate daughter). One of the most poignant aspects of Hilary Mantel’s portrayal of Cromwell is the contrast of his humour, his loyalty and his compassion, with the way his actions are interpreted as cold-hearted, ambitious scheming, by many of the other characters—and by history. The final betrayal that leads to his downfall is just as heart-breaking as I was anticipating. 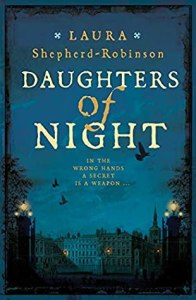 I thoroughly enjoyed this atmospheric and meticulously plotted mystery, set in the dark underbelly of Georgian London. Caroline Corsham escapes the crowds at Vauxhall Pleasure Gardens for a clandestine meeting, but instead discovers the body of a murdered woman. When the authorities dismiss the investigation because the woman was a prostitute, Caro cannot let it go and engages thieftaker Peregrine Child to help her investigate the tangled web of events that led to the woman’s death. Caro finds herself not only disillusioned at the vice, corruption and hypocrisy of the Beau Monde, but also in mortal danger as she unearths secrets that threaten to embarrass some of the most prominent and powerful citizens in the land.

Caro is a wonderfully brave and stubborn character as she seeks justice for voiceless women, while weighed down by her own devastating secret and increasingly aware of her tenuous position—even though she is wealthy, she is still subject to the authority of her family and her absent husband. (I didn’t realise till the end that Caro Corsham and Peregrine Child also featured in the author’s previous novel, Blood & Sugar, which I haven’t read, but it worked perfectly well as a standalone novel.) Daughters of Night skilfully combines evocative, immersive historical detail with a gripping, page-turning plot that will keep you guessing till the last page. Brilliantly done.

The Mercies by Kiran Millwood Hargrave

The Mercies is based on true events—in 1617 on a remote Norwegian island of Vardo there was a terrible storm that took the lives of nearly all the men in the village and this is the starting point for the book. Maren loses her father, her brother and her fiance all at once. But the women of the village do not have time to grieve, life must go on and in order to survive the women take on the men’s responsibilities of fishing, herding and butchering reindeer. But there are bigger issues that will come to bear on this small community. The King of Norway is determined to bring God’s word to all his citizens, and in particular to stamp out the traditional religious practices of the Sami people. Enter Absalom Cornet, a Scottish witch hunter sent to subdue the women of Vardo. A lyrical and captivating story, I couldn’t put it down.

The Five by Hallie Rubenhold

Jack the Ripper’s victims are often dismissed as ‘just prostitutes’ as though the killer had done society a favour by disposing of them. But the first four victims, were not prostitutes at all, just destitute, homeless women with sad life stories, who were murdered while they were sleeping rough. The fifth woman had worked as a prostitute, but does that mean she deserved what she got? The mystery and mythology surrounding Jack the Ripper has made him into an increasingly heroic figure, while reducing the women he murdered into disposable objects of shame. In The Five, Hallie Rubenhold tells their stories in an attempt to reclaim the narrative.

This is a devastating read—firstly for the incredibly difficult lives these women led in Victorian London, where poverty was considered a moral failing, but even more so for the victim-blaming narrative perpetuated by the newspapers and still prevalent today in the media, in courtrooms and government, that suggests that sexual violence against a woman is somehow invited by the way she dresses, the places she goes, or how much she’s had to drink. An important book.

The Confession by Jessie Burton

A beautifully crafted literary mystery. Rose’s mother disappeared when she was a baby and her absence has coloured everything in Rose’s life until one day her father gives her a clue—the name of a novelist who was close to her mother, who was the last person to see her and might be able to finally give Rose answers and closure. The story follows Rose’s quest and at the same time reveals the story of what happened when Elise, Rose’s mother, met the novelist, Constance Holden, on Hampstead Heath in 1980. An intriguing and compelling story about friendship, truth and motherhood.