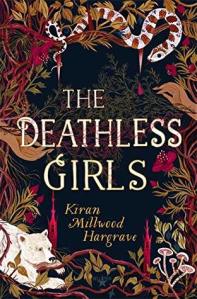 What follows are the erudite musings of Ernest, Ermentrude, Garfield, Gloria, Karen, Mudge and Oggy. (Real Year 8 pupils, not their real names.)

If this book was an animal, what kind of animal would it be?
A bear or a lion

If this book was a colour, what colour would it be?
Brown, crimson, red and black

Which character would you most like to be friends with?
Ermentrude: Kizzy
Gloria: Albu the bear
Karen: Albu and the twins
Mudge: Albu the bear
Oggy: Mira

Who would you cast in a movie version of this book?
Ermentrude would have cast herself in a one-woman show. Karen would’ve cast Zendaya as the twins. Oggy suggested Nina Dobrev for Lil, Victoria Justice for Kizzy and Troian Bellisario for Mira.

What did you enjoy the most about this book?
Ermentrude enjoyed the non-dead peeps, Gloria liked the evil lady, Karen liked the adventure and the unexpected twists, and Oggy liked how feminist and modern it was.

Have you read any other books you could recommend to someone who likes this book:
The Surface Breaks by Louise O’Neill and A Skinful of Shadows by Frances Hardinge

Give the book a star rating out of five:
An average of 4 stars.